As published by the University of Colorado: 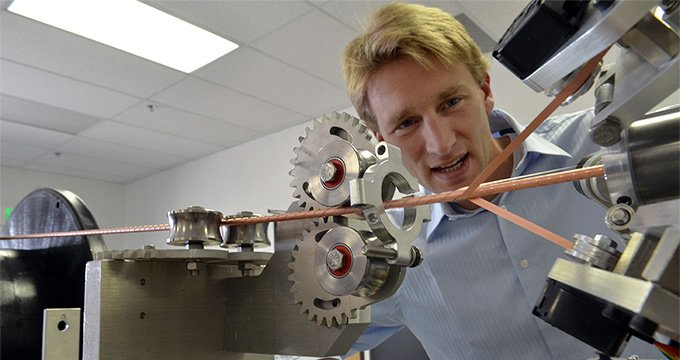 May 29, 2014 –In 2012, people across the globe were dazzled to learn that the Large Hadron Collider—a 17-mile ring buried underground on the border of Switzerland and France—had for the first time provided evidence of the elusive Higgs Boson.

The discovery was made after scientists accelerated two beams of protons in the underground tube to nearly the speed of light and then crashed them into each other. The violent collision produced an array of exotic subatomic particles, including the Higgs Boson, that live only briefly before decaying away.

The Large Hadron Collider, or LHC, is the most powerful atom smasher in the world. But for scientists to get an even better look at the most elementary building blocks of matter, they will need an even more powerful particle accelerator, a feat that requires the advent of new technology.

Van der Laan, also a researcher at the National Institute of Standards and Technology, has developed a new type of superconducting cable that could hold the key to faster particle accelerators by making more powerful magnets.

The beams of particles that whip through underground tubes in the LHC and other particle accelerators are steered along their course with magnets. The higher the energy of the particles in the beam, the stronger the magnet that is necessary to keep them from colliding with the sides of the tubes.

The superconducting electromagnets now used in the most powerful particle accelerators are close to the edge of the physical limit for the magnetic field they can produce, limiting the ability of scientists to create more powerful atomic collisions.

“There’s a pretty big need for the next generation of high-field magnets,” van der Laan said. “The more energy the particles in the beam have, the higher the magnetic field that is necessary to bend them.”

Van der Laan’s innovation came when he realized that the thin tapes of high-temperature superconductors that were already being commercially produced were more or less flexible depending on how you bent them. If bowed in one direction, they broke relatively quickly—but in the opposite direction, they were far more bendable.

Van der Laan began experimenting with wrapping the tapes just so around a wire to form a magnet cable. The idea was to maximize the tapes’ flexibility while bundling them together with the precise spacing needed to generate the amount of current and current density necessary to produce strong magnetic fields. The resulting cables, meticulously woven together in the lab and coated with insulating tape, were far more bendable than any other high-temperature superconducting cables available.

In 2012, van der Laan decided to create a company to option the technology from the university and produce the cables. This year, after fully licensing the technology from CU, Advanced Conductor Technologies is fulfilling its first commercial order for the cables from CERN, the center where the Higgs Boson was discovered.

Those cables will be used to build a magnet, but the cables also have other potential uses, including power transmission. The U.S. Navy, for example, is helping fund the company’s development of cables for possible use on ships.

“High-temperature superconductors can be used in a confined space, like a ship, where you cannot have high-voltage power lines like you do in a city,” van der Laan said. “You have to have insulation and space around traditional high-voltage lines.”

The same principle may make van der Laan’s cables a good fit for use in other places—like data centers—where a lot of power is needed in a small space.

Since the company was founded two years ago, Advanced Conductor Technologies has received multiple grants from the U.S. Department of Energy as well as the U.S. Navy. And van der Laan says he anticipates follow-up orders from CERN and new commercial orders from other customers looking to build stronger magnets, which would result in a rapid scale-up of the company’s production.

“Advanced Conductor Technologies is pursuing an aggressive patent strategy which will ensure them a strong position in the market,” said Ted Weverka, the licensing manager at CU’s Technology Transfer Office. “We are pleased to have them as the conduit for developing this technology.”