Boulder-based Advanced Conductor Technologies (ACT) announced today that it has been awarded a $1.6 million grant from the U.S. Department of Energy’s Advanced Research Projects Agency-Energy (ARPA-E) to develop compact superconducting power cables for future use in twin-aisle electric aircraft. The project will be supported by researchers from Florida State University’s Center for Advanced Power Systems (CAPS) and Los Alamos National Laboratory (LANL). 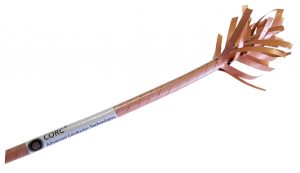 The program will take advantage of ACT’s superconducting Conductor on Round Core (CORC®) cables. They would be compatible with different coolants such as cryogenic helium gas or liquid hydrogen, which is a carbon-free fuel being considered for use in future aircraft.

“Our goal is to develop superconducting cables that would ultimately deliver power of up to 50 MW to the electric motors of future aircraft, which is the power required during take-off for large twin-aisle passenger aircraft with 200 – 300 passengers. The liquid hydrogen fuel that’s under consideration for such aircraft would cool the superconducting cable, removing the need for heavy cryocoolers,” according to Advanced Conductor Technologies’ founder and president, Danko van der Laan.

“Electric aircraft require high power in smaller, lighter packages, for which ACT’s CORC® cables are an excellent candidate,“ explains Sastry Pamidi, Assistant Director of CAPS. “We will use our experience in testing dielectric materials for superconducting cables to support ACT in its effort to reach a voltage rating of 10 kV.”

Dr. Doan Ngyuen, Director of the Pulsed Field Facility at Los Alamos National Laboratory, will assist in developing the fault current limiting aspect of the superconducting cable. The cable would almost immediately limit an overcurrent in case of an electrical fault before the much slower circuit breakers are activated. This ability would add another layer of safety to the electrical system of the aircraft.